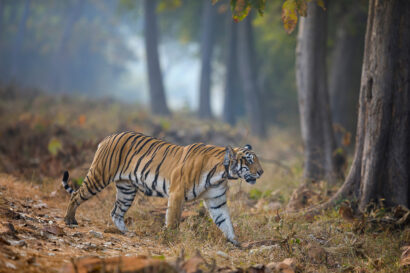 As a component of the world’s ecosystems, Wildlife contributes to the balance and stability of natural processes. Wildlife conservation efforts in India protect these species’ survival and educate people on how to coexist with other species sustainably.

The human population has exploded in the last 200 years, exceeding more than 7 billion people presently, and it continues to grow so. It signifies that the earth’s natural treasures are diminishing at an unprecedented rate.

This growth and development also threaten the habitats and survival of various species of wildlife around the world, especially animals and plants that may have been relocated for land developments or slaughtered for food or other diplomatic reasons.

Wildlife faces several issues, including invasive species from other parts of the world, climate change, pollution, hunting, fishing, and poaching.

Our daily actions, such as logging, poaching, and agricultural expansion, are driving species extinction and biodiversity loss. Wildlife species are getting pushed to the brink of extinction due to human activity. Many animals, such as rhinoceros and elephants, are on the verge of extinction as a result of poaching.

We engage in a myriad of activities that harm endangered wildlife species. We should conserve forests and wildlife in India and other countries and protect these species because there are numerous benefits for humans and animals, including taking action to conserve wildlife.

What is meant by wildlife conservation, and what are its types?

The practice of safeguarding animal species and their habitats is known as wildlife conservation, and it encompasses both the animals and their environment.

Generally, we utilise wildlife conservation to protect species on the verge of extinction due to manmade causes. Pollution, climate change, and unjust laws are examples of such causes. Furthermore, quotas can lead to overhunting and an overabundance of wild animals in captivity.

Legislation such as the Wildlife Protection Act of 1972, the Endangered Species Act, the establishment and protection of public lands, and responsible public activities that conserve wild animal populations are all used to attain this goal.

Many efforts have been made to conserve animals at the international and national levels. Many non-governmental organisations are working to protect wildlife. The Convention on International Trade in Endangered Species of Wild Flora and Fauna (CITES) was established in 1973 and is one of the most well-known international agreements. It categorises numerous species into different groups. Wildlife conservation can get divided into two categories:

“Off-site conservation” is the direct translation of ex situ conservation. It is the method of preserving a nearly extinct plant or animal species, variety, or breed outside of its native surroundings.

For example, by evacuating a portion of a population from an endangered area and putting it in an enclosed environment comparable to the individual animal’s native environment while still being under human care such as zoological parks and wildlife safaris.

In situ conservation refers to the conservation and protection of ecosystems and natural habitats and the maintenance and retrieval of survivable populations of species in their natural surroundings, or, in the case of cultivated species, in the surroundings where their distinct and unique properties evolved.

Wildlife conservation efforts in India by the Government

The Indian government made the following measures to conserve wildlife:

Captive breeding is the practice of selecting wild animals and rearing them in controlled environments under the supervision of professionals. It could be the last chance for a species to survive in the wild.

South Asia Wildlife Enforcement Network (SAWEN) is a support organisation for international wildlife enforcement. In 2011, it debuted in Paro, Bhutan. It was created to foster cooperation to harmonise and enforce wildlife protection. Afghanistan, India, Nepal, Pakistan, Bhutan, Sri Lanka, Bangladesh, and the Maldives make up the SAWEN.

The Ganges River Dolphin has been designated a National Aquatic Animal by the Ministry of Environment, Forests, and Climate Change. The Wildlife Protection Act of 1972 included it in Schedule I. River water pollution, poaching, and siltation get recognised as severe hazards to dolphins.

The major objective of the conservation project of crocodiles is to protect the remaining crocodile population in its natural habitat—the IUCN lists “Ghariyal” as Critically Endangered.

It was founded in 1999 by the Ministry of Environment, Forests, and Climate Change in conjunction with the United Nations Development Programme (UNDP). The Olive Ridley Turtle travels to India only during the winter. The Wildlife Institute of India is the project’s implementing agency. The classifications under the International Union for Conservation of Nature (IUCN) for the sea turtles are considered vulnerable.

It is a government-sponsored programme that began in 1992. It is used in 13 different states, and 88 Elephant corridors were built. In collaboration with the Wildlife Trust of India, the Ministry of Environment, Forest, and Climate Change created the Haathi Mere Saathi scheme.

It is a government-sponsored programme that began in 1973 to conserve the endangered Indian Tiger. The tiger population has plummeted in recent decades, and the National Tiger Conservation Authority got established for this purpose. The initiative began with nine Tiger reserves and now has over twenty. A tiger census gets undertaken every four years.

Wildlife conservation is essential for a variety of reasons, including:

All creatures play a role in ecology. When one animal species’ population declines, another is in jeopardy. The natural food cycle gets disrupted, and as a result, the ecology suffers.

Droughts will occur due to the degradation of water supplies on failing to preserve the animals and natural habitats. In addition, human activities like deforestation and logging harm the environment, and the maintenance of flora and fauna aid ecological stability.

Plants, for example, keep the environment’s oxygen and carbon dioxide levels in check. As a result, plants play a major role in maintaining a healthy ecology.

Human food security gets improved through wildlife conservation. It also contributes to agricultural diversification research. Food availability increases by protecting natural habitats from deterioration and forests from destruction. It guarantees that agricultural activities have access to sufficient and constant natural resources. As a result, food security gets multiplied. It also guarantees that clean air and water are available.

Animals’ importance in pharmaceutical products cannot get overstated. Cobra venom, for example, is required for the production of leprosy medicine. Lobsters can also get used as antifungals. Wildlife conservation also protects their natural habitat, critical for medicinal research and the pharmaceutical industry’s long-term viability.

Tourism, which contributes significantly to a country’s GDP, is negatively impacted by not prioritising wildlife conservation. Many tourists like to spend their vacations in wildlife refuges, national parks, forests, and zoos. They also participate in various activities, such as camping, fishing, boating, and hiking. Wildlife conservation allows people to experience nature at its best while enhancing a country’s economic progress.

Heritage and culture get preserved

The local flora and wildlife get linked to livelihood and traditional practices in some areas. As a result, environmental conservation is critical to avoid the loss of native heritage and land. Africa Safaris include animals such as lions, leopards, cheetahs, giraffes, and elephants. The movement of tens of thousands of wild animals linked with the “Serengeti Plain” ecosystem is another evidence of the importance of wildlife conservation in preserving tradition and culture.

Pollination and the survival of native plant species get aided

Wildlife conservation is essential in crop production, intercropping, and maintaining the diversity of native plant species since they rely on nectar from flowers. Bees transfer pollen by travelling from one blossom to another in quest of nectar, sustaining crop growth. Insects, birds, butterflies aid pollination, and bees aid pollination; hence their conservation is critical for food production.

Even though animal study has increased in recent decades, it gets estimated that many animals and plants are yet to get discovered. When most human drugs are derived from microbiological creatures, animals, and plants, protecting wildlife and their habitats becomes clear. Indeed, some researchers believe that drugs for some incurable diseases will most likely come from yet-to-be-discovered animals or plants, emphasising the need to protect natural environments.

Wildlife is also essential for a variety of job options. Because of wildlife, there are tens of thousands of jobs. Many individuals work in zoos or game parks where wild animals are present. Journalists also work in areas like these, producing documentaries about wildlife, the natural world, and other topics. Wildlife stimulates tourism. Tourists that visit national parks and sanctuaries look forward to staying in cabins in the woods. It is why many resorts are within walking distance of amusement parks. As a result, many people working in the wildlife, tourism, and hospitality industries rely heavily on wildlife protection.

For the generations to Come

Conservation efforts will ensure that future generations will see today’s animals. Various animal species are on the verge of extinction due to human actions and other factors. The black and Javan rhinoceros, the South China tiger, the Sumatran elephant, the Amur leopard, the pangolin, the Cross River gorilla, and the Hawksbill turtle are among these animal species which are on the verge of extinction.

It is a fundamental duty of citizens to safeguard wildlife and exhibit sympathy for living animals, according to Article 51A(g) of the Indian Constitution of 1950.

Article 48A states that it is the State’s responsibility to conserve, safeguard, and work to improve the country’s forests and animals.

Schedule VII List III of the Constitution’s Concurrent List covers the subject of wild animal and bird protection. It shows that both the Union and the State Governments governs the subject.

Wildlife Treaties on a Global Scale

As the world’s most intelligent species, humans must ensure that our actions and omissions do not harm nature. Wildlife protection is essential for long-term development, and the development of human activities into these species’ habitats caused significant environmental damage.

Wildlife regulations must get enforced with greater rigour. Many efforts have been made on the international and national levels. Project Tiger, Project Elephant, Captive Breeding Program, and others have been undertaken as wildlife conservation efforts in India. India also uses a variety of strategies and policies at the international level and per international treaties and conventions. Through these projects, an attempt has been made to mitigate the damage and prevent future interruptions. The extinction of wildlife poses a serious threat to the entire world. And we all should understand one crucial ecosystem component is lost, the entire ecosystem suffers.

What is the most crucial activity leading to the extinction of wildlife?

The regular alteration and destruction of the natural habitat are leading to the extinction of wildlife.

A Giant Panda is a symbol.

When did Project Tiger launch?

In which year was Project Elephant launched?

In which year was Project Snow Leopard launched?

What year did the Wildlife Protection Act go into effect?

How can the viable material of the endangered species preserve?

By the Gene Bank of endangered species