All that you need to know about Trade Unions in India 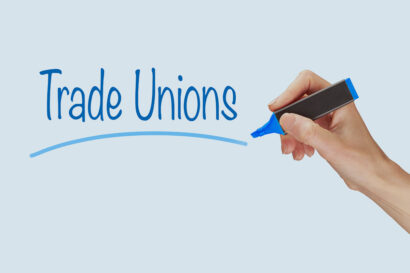 Trade unions in India arose as a representative of workers and the working class. Workers have worked hard to secure an acceptable level of protection against exploitation over the years. The expansion of trade unions became required with the emergence of modern industrial establishments, which involved the employment of many workers under the condition of low negotiating power at the individual level.

So, a continuing association of wage earners was formed to sustain and improve their working conditions. A long-term continuous association of employees created and maintained for the explicit goal of furthering and safeguarding members’ interests in their working relationship.

A trade union is any temporary or permanent association mainly created to control the relationship between employers and workers, or between workers and workers, or between employers and employers, or for putting restrictive rules on the conduct of any trade or business. As a whole, a trade union is a tool for defending against exploitation and providing a platform for gathering the forces of the working class.

History of Trade Unions in India

Trade unions in India arise due to large-scale industrial development rather than from any of society’s established structures. N.M. Lokhande created the Bombay Mill-Hands Association in 1890, which was India’s first labour organisation. B.P. Wadia formed the Madras Labour Union, the first legally registered trade union, in 1918.

The All India Trade Union Congress (AITUC) was created in 1920 after the International Labour Organization raised concerns about the impact of any trade union in the country that was not under the control and authority of major political parties.

Many commissions established during the colonial era emphasised the establishment of trade unions in India. For example,

Functions of Trade Unions in India

Problems faced by Trade Unions in India currently are:

In India, there are currently 12 major unions recognised as central trade union organisations:

India’s labour legislation strives to achieve social fairness in the country. External and domestic causes have propelled the growth of labour regulation in India.

External reasons include the founding of the International Labour Organization. In contrast, internal factors include The Swaraj movement of 1921-24 and the royal commission on labour, which prepared the way for different labour regulations and persuaded the constitution’s writers to include such rules in the constitution that would benefit the writers’ workers.

Labour is a concurrent list issue under the constitution, and both the centre and the states can create laws on the subject.

“Any combination of two or more Trade Unions, permanently or temporarily, mainly formed to maintain a good relationship between;

or to set restrictive rules on the conduct of any trade or business.,” according to Section 2 (h) of the Trade Union Act of 1926.

Objectives of The Trade Union Act, 1926

The Act was adopted to provide for the registration of trade unions and the verification of the membership of registered trade unions for them to have legal and corporate status. As soon as a trade union gets registered, it is considered an artificial person by the law, capable of exercising rights.

Provisions of the Trade Union Act, 1926

The following are the essential provisions to be followed by the trade unions in India:

Any Trade Union with seven or more members may apply for registration under this Act:

A Trade Union registration application must be presented to the Registrar and must get accompanied by the following documents:

Before submitting an application for registration, a Trade Union that has been in existence for more than one year must present a statement of its assets and liabilities.

Section 6: Provisions necessarily to be mentioned in the rules of a Trade Union

A Trade Union must not be eligible for registration under this Act unless its executive body gets formed in conformity with the provisions of this Act and its rules include the following provisions:

When the Registrar is satisfied that the Union has met all of the registration requirements of this Act, he or she shall register the Trade Union and provide a certificate of registration to it.

The Registrar may not refuse to register a Trade Union if the application meets the technical requirements outlined in this Act.

A Trade Union’s registration certificate may be revoked or cancelled:

All messages and notices to a registered Trade Union should be sent to its registered office. Any change in the address of the head office must get communicated to the Registrar in writing within fourteen days of the change.

Section 15: Purposes for which general funds may get used:

No action or other legal process shall be brought in any Civil Court against any registered Trade Union or its member for any conduct done in contemplation or furtherance of a trade dispute in which such member or the Trade Union is a party.

When a registered Trade Union get dissolved, the Registrar must receive a notice of dissolution signed by seven members and the Trade Union Secretary within fourteen days of the dissolution.

Rights and Liabilities for the Trade Unions in India

The following are the rights and liabilities under the act for Trade Unions in India:

The hotel staff used to earn 65 days of vacation per year, but the management sought to cut it by 15 days due to some administrative concerns. The workers strongly opposed the idea, and Maharashtra Samarth Kamgar Sanghatna got tasked with resolving the issue. MSKS recognised the workers’ predicament and approached management to agree through collective bargaining.

Maharashtra Samarth Kamgar Sanghatna promised to persuade the workers in exchange for management agreeing to provide 20 days’ extra pay in December. The management and employees discussed the matter. The management discovered that they had the workers working for an extra 15 days, and the workers found that they were getting paid for 20 days for only 15 days of extra work. Both parties agreed. As a result, MSKS successfully achieved a win-win situation through collective bargaining.

Trade unions in India mean to fight not only for the needs of workers and improvements in their working circumstances but also for the larger good of the country, on the premise that what is good for the country is also good for labour.

The Trade Union Act 1926 is welfare legislation established to protect workers in organised and unorganised sectors from inhumane treatment and protect their human rights. As a result, trade union registration, regulation, benefits, and protection are all included in the Act. So, now trade unions in India have become powerful pressure groups in the industrial sector and the agricultural and other associated sectors due to the rise of the media.

When was the Trade Union Act enacted?

When did the Trade Union Act come into effect?

How many times was the Trade Union Act amended?

Which is the biggest trade union in India right now?