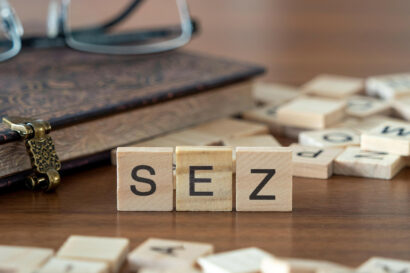 SEZ program was announced during the annual review of the EXIM Directive, which came into effect on April 1, 2000. The basic idea behind establishing such a program is to establish a zone as an area where export production can be carried out free from all import/export rules and regulations, giving them operational flexibility.

Special economic zones (SEZs) are regions of a country that are subject to a different economic system than the rest of the country. Specifically, SEZ economic regulations encourage and attract foreign direct investment (FDI).

What are Special Economic Zones?

Special economic zones are defined under clause (za) of section 2 of the Special Economic Zones Act, 2005

SEZs are delimited enclaves that are treated as foreign territory for industrial, service, and commerce operations, with customs tariffs relaxed and a more permissive regime for other levies, foreign investments, and other transactions.

A special economic zone (SEZ) is an area with different business and trade laws than the rest of the country. These zones are located within a country’s boundaries and have the goals of boosting trade balance, increased investment, employment, effective administration, and job creation.

“The doctrine of equality before the law is the rule of law that pervades the Indian Constitution.”

The basic concept of equality is that “equality is a basic feature of the Indian Constitution, or that treating equals unequally or unequal equally constitutes the violation of the basic structure of the constitution.”

Therefore, laws or statutory provisions that violate the principles may be considered illegal.

“The procedures prescribed to deprive a person of livelihood must address the challenges of Article 14 and must not be arbitrary, fantasy, or oppressive.”

The law mentioned can be considered a breach of the idea of ​​equality. Article 3 (4) of the law stipulates the procedure for applying for the establishment of an SEZ. After the establishment of the SEZ, the SEZ will be given specific benefits and will be relieved of its entire obligations. Due to the special treatment of the SEZ, it divides the national market into two.

Therefore, this distinction is unreasonable and arbitrary, has no rational basis, and violates Article 14. It is an established legal principle that “the right to life includes the right to livelihood” and “the right to a decent life, that is, more than just the existence of an animal”. Therefore, the nation must protect and respect the lives of its citizens.

There are millions of people who depend on farmland for their livelihoods. The introduction of India’s special economic zone led to the expropriation of agricultural land and affected the overall livelihood of farmers.

There is no provision in the SEZ Act to give farmers a livelihood deprived of them in the name of development. Therefore, this expropriation of land from farmers violates their fundamental rights in Article 21 of the Constitution.

Here, the power of the state government is arbitrary and not controlled by law. “Arbitrariness and irrationality deny the rule of law.” Therefore, the law gives the government unlimited power, and the procedure for identifying the area for establishing an SEZ is unfair and unfair.

In the welfare state, the main task of the nation is to ensure the well-being of the people. Increasing SEZ problems also lead to increased resistance from the rural people.

Government and the developers claim that resistance is unreasonable. The concept of SEZ needs to get thoroughly reviewed. They take advantage of the relationship with the ruling dispensation and make it clear at the national and state levels.

These lands are already used for agriculture and general public purposes. “It is the government’s mistake to purchase land that is currently in use by the public.”

The development manager can publish the release without hearing the Emission Control Bureau’s opinion. Units are allowed to provide compliance reports to comply with specified pollution standards.

Units classified in the green industry do not require a certificate, which can cause life-threatening damage to the balance of the ecosystem.

Units in the SEZ are free to apply methods that comply with environmental standards.

Summing up, the environment cannot get sacrificed on the excuse or the blanket of economic development of the country.

SEZ Act 2005 avoids the welfare labourers, as the act provided about the inapplicability of the act on labour laws.

The applicability of the labour laws under this act is exempted under Section 49(1), which states that:

“Provided, however, that nothing in this section shall apply to any modifications of any Central Act or any rules or regulations established thereunder, or any notification or order issued, or direction given, or scheme made thereunder, so far as such modification, rule, regulation, notification, order, or direction, or scheme relates to matters connected to trade unions, industrial and labour disputes, the welfare of labour including working conditions, provident funds, employers.”

Special Economic Zones Act, 2005 violates the letter and spirit of the Indian Constitution. The Act has been incorporated into the Constitution’s Ninth Schedule, incorporating that this law is exempted from judicial review.

Incorporating the legislation under the Ninth schedule raises the scope of unconstitutional actions.

Salient Features of the SEZ Bill, 2005

Salient features of the Bill include;

Issues with the SEZ

With the introduction of SEZs, there were some issues arising which are pointed out here:-

Lands will be a scarce resource in our country in the coming decades. The land acquiring policies must be reviewed concerning SEZs to evolve a sustainable land-use strategy.

Economic development, growth and industrialisation are good governance outcomes, not policies based on subsidies and political patronage.

It is pointed out that the more successful the SEZs, the more the government would lose revenue due to the tax concessions.

If comprehensive care with proper deliberation is provided, SEZs can generate sustainable value.

When was the recent amendment brought to the SEZ Act 2005, and What was the amendment?

The recent amendment to the 2005 Act was brought in 2019 with the introduction of the Special Economic Zones (Amendment) Act, 2019.

Section 2 of the act of 2005 was amended to insert trust and other entities under the definition of “Local authority” to bring it under the act's purview.

Which section of the act of 2005 prescribes establishing the SEZs' authority?

What are the functions of SEZs’ authority?

Will this SEZ Act prevail over any other law that will be inconsistent with the act's provisions?

This act will have an overriding effect over other laws inconsistent with this act's provisions as per section 51 of the SEZ act 2005.

Are there any exceptions for the establishment of the special economic zones within the boundaries of India?

Yes, a special economic zone can be established within India's boundaries with the central government's discretion to the places covered under section 7 of the customs act, 1962.