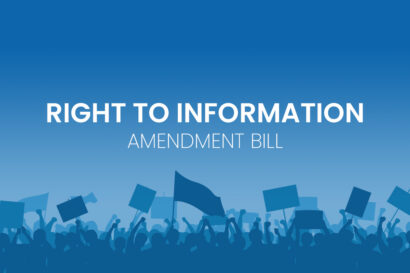 The right to information is a fundamental right of the citizens of India under Article 19(1)(a) of the Indian constitution. It is considered an implied fundamental right under as an aspect of freedom of speech and expression.

Citizens of the country are entitled to enforce this right by filing an application with the State Chief Information Commission to obtain any information concerning the administrative acts or decisions undertaken by the state.

This right is not absolute and is subjected to reasonable restrictions.

The RTI Amendment bill was introduced in 2019, seeking to amend the Right to Information Act of 2005. The minister of state presented it for personnel, public grievances and pensions.

Amendments proposed by the Bill

The law provides that CICs and ICs appointed at the central and state levels serve in office for five years.

The bill of 2019 abolishes this provision and states that the central government will announce the terms of CIC and IC.

The bill seeks to amend these provisions so that the central government determines central and state CICs and ICs’ salaries, allowances, and other terms of use.

If, at the time of appointment of CICs and ICs at the central and state levels, they receive a pension or other retirement benefit for previous government services they were appointed on, their salary will be reduced by an amount of pension equivalent to retirement benefits.

The bill abolishes these above-mentioned provisions.

Effect of the RTI Amendment Bill on RTI Act 2005

The introduction of the RTI Amendment Bill 2019 affected the RTI Act 2005.

The Right to information (amendment) bill, 2019 was accepted by the parliament and came with the Right to Information (Amendment) Act, 2019, which amended the provisions of the RTI Act 2005.

The central government is also entitled to decide on the salary and allowances of the CICs and ICs at the central and state levels. So, there’s a possibility that the CIC and ICs will work at the government’s discretion to please them by extending their terms of services or salary.

It also attacked the fundamental motive of the independent working of the commission. The bill will also raise the possibility of conflict between the central and state governments.

The Chief Minister of the state as per section 15(3) of the Right to information act, 2005.

Which section containing the provision for the term of office and condition of service was amended by RTI amendment bill 2019?

Which provisions were amended after the introduction and acceptance of the RTI amendment bill, 2019, in parliament?

The penalty will be an amount of Rs 250/- daily until the application is received or information is furnished. This penalty levied daily should not extend to more than Rs 25000/-.