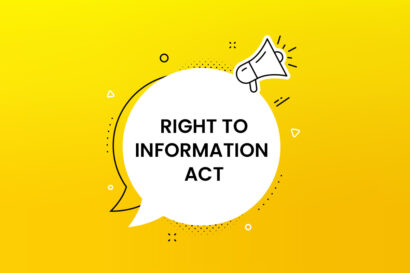 The Right to Information Act (RTI) is legislation in force within the jurisdiction of India that establishes the rules and regulations for citizens’ access to information. It repealed the former Freedom of Information Act, 2002.

Under the RTI Act, any Indian citizen has the right to ask for information from a “public authority”, and a reply for such purpose can be expected within thirty days. If the situation concerns a plaintiff’s life or liberty, the data must get supplied within 48 hours.

The Act requires every public entity to computerise their data for wide distribution and proactively disseminate certain types of information so that citizens only need to make formal requests for information.

Let’s study more about the act that provides a legal framework to access information.

What is meant by RTI Act?

The Right to Information Act is a basic right guaranteed by our constitution’s article 19(a). Every citizen has the right to free speech and expression, according to article 19(1)(a). At the same time, this is not an absolute right and is subjected to reasonable restrictions. The citizens of India solemnly declare to ensure the liberty of thought and expression to all of their inhabitants in the Preamble to the Constitution of India.

The Supreme Court of India ruled that freedom of speech and expression allows the capability to spread ideas. The UPA government passed it on the 11th of May 2005 in the Lok Sabha and the Rajya Sabha on the 12th of May. The President of India gave his assent to this bill on 15th June 2005. The RTI act became effective on the 12th of October 2005.

The RTI Act of 2005 permits any citizen to obtain government information. So, any citizen (who can also request certified photocopies) can inspect any government document.

Let’s look at what the term “information” means in the context of the RTI Act of 2005. According to the Right to Information Act, “information” includes

Our country’s corruption was fast expanding. The public was unaware of the methods by which public funds were spent. As a result, the government enacted the right to information act. The act covered the employees in corporate organisations with the right to know information.

According to the RTI Act of 2005, democracy requires informed citizens and information transparency, which are critical to its functioning and help hold governments and their functionaries accountable.

Aims and objectives of the RTI Act

The RTI Act’s primary goal is to bring clarity to Indian citizens regarding information, prevent corruption, and enhance accountability in all public authorities’ workings. The other objectives of the act include:

Salient features of the RTI Act

Amendments proposed by the Bill of 2019

The law provides that CICs and ICs appointed at the central and state levels serve in office for five years.

The bill of 2019 proposes to abolish this provision and states that the central government will announce the terms of CIC and IC.

The bill seeks to amend these provisions so that the central government determines central and state CICs and ICs’ salaries, allowances, and other terms of use.

Previously, If at the time of appointment of CICs and ICs at the central and state levels, they receive a pension or other retirement benefit for previous government services they were appointed on, their salary will get reduced by an amount of pension equivalent to retirement benefits. This provision was omitted after the bill was passed and came to effect.

The parliament passed the bill and brought effect to the above-suggested amendments in the act of 2005.

Criticism of the RTI Act

To file an RTI application, you only need to follow three simple procedures.

Step 1: Create an application that includes all of the necessary details.

Step 2: Provide proof of payment of the application fee.

Essential elements of an RTI application

In this case, the petitioner filed a lawsuit against the state of Kerala even though the FIR had been filed; the petitioner received his copy only two months later. Until the petitioner could acquire a copy of the FIR, he and his family were unaware of the accusations against him.

The petitioner further claimed that under the RTI Act of 2005, all public servants needed to make all information recorded available to the public. He further said that the FIR should be posted on the police station’s website so anyone, including those living outside the nation, can review it.

The CIC ruled that the FIR is a public record and should not be made public until the investigation is done. However, it can be claimed as a matter of legal right by the informant and the accused under the legal rules of the CrPC, 1973. According to the courts, the police officials allegedly needed to submit a copy of the FIR in response to an RTI Act request.

The Right to Information Act got enacted to promote social justice, openness, and accountability in government. Still, it has yet to fulfil its full potential due to some roadblocks erected due to systematic failures.

According to the Delhi High Court, the exploitation of the RTI Act must be dealt with responsibly, or the public will lose trust and belief in the RTI Act. It is widely acknowledged that the right to information is essential but insufficient for better government.

Much more must be done to promote government accountability, including whistleblower protection, decentralisation of power, and the fusion of authority and responsibility. This statute provides the opportunity to rethink governance practices, particularly at the roots level, where people have the most engagement with government.

Which was the first state to introduce a law on the right to information?

What is the maximum amount of penalty imposed under the RTI Act?

Which section under RTI Act contains a provision regarding obtaining information through an application?

Section 6 of the RTI Act, 2005 contains a provision regarding obtaining information by an application with the required fee.

Are there any reasonable restrictions on the access to information under the act?

Which section containing the provision for the term of office and condition of service was amended by RTI amendment bill 2019?

Which provisions were amended after the introduction and acceptance of the RTI amendment bill, 2019, in parliament?

The penalty will be an amount of Rs 250/- daily until the application is received or information gets furnished. This daily penalty should not extend to more than Rs 25000/-.