What is Public Distribution System? 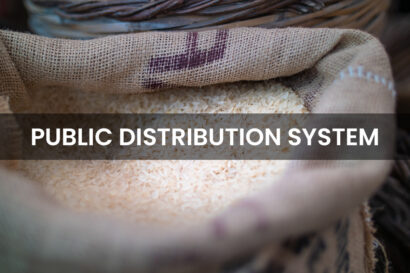 The Public Distribution Systems are operated jointly by the Central and State governments. Central Government primarily deals with the buffer stock and controls the external and internal trade in food grains.

Through its procurement activity, the Central Government tries to make even the differences between surplus and deficit of food grain-producing states.

Objectives of the Public Distribution System

Features of the Public Distribution System

The Public Distribution System of India got introduced during the Second World War and was seen as a wartime rationing measure. Before 1960 the PDS was generally dependent on the imports and exports of the food grains. In 1960 the system was expanded to respond to the food shortage.

The government set up the Agriculture Prices Commission and Food Corporation of India to improve the domestic procurement and storage of food and grains for grain distribution to the public.

By 1970 the PDS evolved into a universal scheme of subsidised food distribution. Till 1992, the Public Distribution System was a general entitlement scheme for all the consumers without any target.

The system covered 1775 blocks. It covered Specific Programmes such as the Drought Prone Area Programme (DPAP), Integrated Tribal Development Projects (ITDP), and Desert Development Programme(DDP). These programs were implemented in Designated Hill areas and identified in consultation with the State Government.

The TPDS made it necessary for the states to implement arrangements to identify the poor, deliver foodgrains and distribute it in a transparent and accountable manner at the Fair Price Shops. The scheme got introduced to benefit about six crore, low-income families.

In December 2000, Antyodaya Anna Yojna was launched to make TPDS more focused and targeted toward the poor family.

A National Sample Survey exercise pointed out that about 5% of the total pollution in the country sleeps without the two square meals.

In 2013 the National Food Security Act 2013 got enacted. The Act relies mainly on the existing TPDS to deliver the food grains as a legal entitlement to poor households. It marks the shift by making the right to food a justifiable right. Antodaya Anna Yojna has involved the identification of one-crore poor families.

Following are the importance of the Public Distribution System:

The State and the Central government are responsible for providing food and grains to the identified beneficiaries. The Central Government procures food grain from the farmers at a minimum support price.

The Central government also sells it to the states at Central issue prices and is also responsible for transporting the grains to a godown in each state.

The States bear the responsibility of transporting the food grain from these godowns to the fair price shop, and the beneficiary buys the food grains at a lower price.

The states subsidise the price of food grains before selling them to the beneficiary.

The working of the Public Distribution System involves steps to be followed. The steps include:

Issues associated with PDS in India

Technology-based reforms implemented by states and their benefits:

The Public Distribution System is the key component of government for providing nutrition and food security. PDS is supplemental and is not meant to make the entire requirement of the commodity available. But the motive is to provide the basic food facility to everyone.

The Targeted Public Distribution System got launched in June 1997.

PDS is a system where the poorer sections of society can procure food from government-regulated shops.

What is the objective of the Public Distribution System?

The objective of PDS is to ensure food security and poverty alleviation by making essential commodities available along with the food grains at an affordable price at the consumer's doorstep.

What is the Public Distribution System related to?