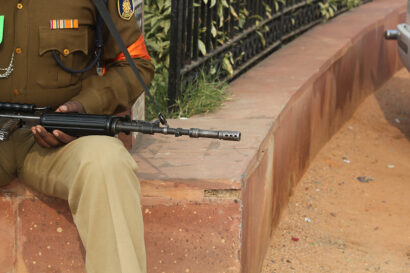 The Police Act 1861 is colonial period legislation that is in force yet. The legislation was enacted to make the police a more effective tool for preventing, managing, and detecting crime and criminal activity. Each state government has the authority to establish its police force under the Police Act.

The British government brought the Act in 1861, incorporating the rules and regulations governing police personnel. So, it provides for powers and duties of the officers and appointment, dismissal, etc., of inferior officers.

Section 23 of the Act provides that every police officer shall have the duty to promptly obey and execute all orders and warrants lawfully issued to him by any competent authority;

They also have to:

Section 5 of the Police Act also provided magisterial powers to the inspector general of police, subject to some limitations. So, the police also have quasi-judicial functions to exercise.

The Act provides for the employment of special police officers to control any form of unlawful assembly, riot, or disturbance of public peace under Section 17.

The powers of these special police officers will be the same as exercisable by an ordinary police officer as provided under section 18.

Section 19 of the act provides penalties against police officers who are negligent in their duty.

The police are authorised to regulate public assemblies and processions by granting licenses for the same. On committing any violation regarding the conditions of the license, then the police have the authority to stop such a profession and form an assembly.

There are other punishments laid down for the offences committed on roads and the power of police officers to take action in such events in section 34 of the act.

The act also states that the power to inquire into an offence committed by any police officer lies in the hands of an officer exercising magisterial powers.

All the investigations and prosecution should be commenced within 3 months from receiving the complaint of the commitment of the offence under section 42 of the Police Act 1861.

According to section 44 of the act, The police officers are obliged to maintain a general diary containing:-

The police officials should maintain a general diary in the manner prescribed by the state government, which should include:

A critique of the Indian Police Act

The arbitrary actions by police from ancient times are prevalent even now, resulting in people losing trust in the police system in India.

Soon after the rebellion of 1857, the British government enacted the Police Act in 1861 to improve the country’s police administration and avoid further revolts. Even after gaining independence from colonial rule, the British time legislation is still in force.

The National Police Commission (NPC) suggested the need for reform in the policing system of India and initiated the drafting of a Model Police Act. Unfortunately, no state embraced this proposed measure, which was prepared in reaction to the times and aimed to address some of the problems afflicting policing.

The police were also blatantly misused for political purposes during the Emergency (1975-1977). The NPC mentioned the problem of political interference in its 1979 report.

In 2000, the National Police Commission recognised indiscriminate police arrests as a major source of corruption. The Report stated that the arrests should be made in rare cases and that an allegation of commission of an offence cannot constitute a ground for arrest.

As “police” is a subject in the list II of schedule 7 under article 246 of the constitution of India, the superintendence of the police is the responsibility of the state government.

Such a state of affairs resulted in widespread politicisation of the police, where increasing loyalty is owed to not the law but to the ruling political elites.

Another problem with this legislation is that the sole independent authority with the capacity to oversee or investigate police excesses is the National Human Rights Commission (NHRC). The Commission has the facility only to advise the government.

If any government refuses to accept the NHRC’s advice, no provision in the law empowers the Commission to force the govt to implement its advice. It can approach the upper courts and seek directions.

Even the J.S Verma Committee, founded after the Nirbhaya Rape case, suggested police reforms. There’s a requirement to introduce policy reforms so that the police personnel can be made accountable by the citizens in case of negligence.

The Police Act must be amended or replaced with legislation that reflects the need of the changing times. The Act is weak in most of the parameters that govern democratic police legislation.

Accountability of police in India

Public law liability of police authorities has its source in the Constitution of India and administrative law. The courts have repeatedly laid down the rationale for governance for violation of fundamental rights stated in Part III of the Constitution, such as:

The apex court has stated from time to time in various judgements that the police are liable under public law and have imposed pecuniary liability on the State as compensation for the harm caused.

In Saheli vs Commissioner of Police, Delhi, the court observed that the state is liable for the tortious acts of its employees.

In Rudul Shah and Bhim Singh, the court held that a compensation award is a remedy available in public law based on the principle of strict liability for contravention of fundamental rights.

In the case of Uttarakhand Sangharsh Samiti v. the State of U.P., the division bench of the High Court of Allahabad held that “Every act done by a public servant doesn’t fall under the ambit of public duty as per section 197 of CrPC, but only those acts which have direct nexus to the discharge of official duty will fall under the ambit of the said section”.

The defence under section 197 of CrPC can be taken only if the accused police personnel proves that the alleged criminal act was done in the course of performing his official duty.

The acts in violation of fundamental rights have never been considered in the course of official duties by the Apex Courts.

The State can be held liable for the misconduct of police for violation of the fundamental rights through a civil suit claiming compensation against the damages resulting from such violation. But precedents suggest that it is writ petitions under public law that have been used as a remedy to exclude private law.

In Kasturi Lal Ralia Ram Jain v. State of Uttar Pradesh, the plea for sovereign immunity was upheld for tortious acts of its servants. The court observed that “Even though the doctrine is taken as a defence in private law in an action based on tort law but it is not applicable in the cases concerning the contravention of fundamental rights”.

In the State of Rajasthan v. Vidyawati, the five-judge bench of the Supreme Court held that the principle of sovereign immunity was based on old feudalistic notions of justice that assume that the king can do no wrong.

The Apex Court held that the state cannot hold the sovereign defence immunity as the state can be held liable under the vicarious liability principle for its employees’ negligence.

What was the primary objective of the Indian Police Act?

The main objective of the Police Act 1861 was to bring reform to the administration system and curb revolts, processions and assemblies.

Mainly Britishers aimed to suppress Indian revolts against their unethical practices by introducing this legislation.

It also aimed to bring the conduct of the inferior police officers under the ambit of the inspector general of police’s magisterial powers.

Who can control the police in India?

The police officers in India come under the ambit of their particular state legislation enacted to govern them.

The Ministry of Home Affairs (MHoW) is responsible for executing these laws through effective policing in India.

The central home ministry is responsible for the internal security of the whole country. It governs the central law enforcement agencies and police of union territories of the country directly.

The state home ministry regulates the conduct of the police authorities within their respective states.

That doesn’t mean that both the ministry working at different levels are separate. The state home ministries must report to the central home ministry during reasonable time intervals.

Note:- The Indian Police Service (IPS) officers comes under the ambit of the central ministry of home affairs.

In the case of Prakash Singh v. union of India W.P.(civil) 1996, the supreme court laid the guidelines for the states for an effective administrative system for police authorities.

The Police Act 1861 came to suppress revolts against the colonial government. Still, it proved to be ineffective in future scenarios, and now states have their legislation to govern and regulate police authorities at the state level.

Besides having so much legislation to govern and regulate their conduct, the police system in India is worsening because of their arbitrary conduct and misuse of power by them.

The police authorities also misuse their power to cause undue influence on ordinary citizens or sometimes use force without lawful authority, which is under ignorance by the senior officers in service.

The misuse of power is also a result of the lack of legal awareness about the relevant legislation prescribed for it.

The lack of periodic performance evaluation and a poor accountability mechanism result in the public losing confidence in the police.

Which section of the Police Act of 1861 defines the scope of the act?

The act's scope is defined under section 44 of the act.

Does an Inspector general entitled to make rules regarding the rules of conduct of police officers to avoid any neglect on duty?

Yes, an Inspector general is entitled to make rules in such regard.

Where are the duties of a police officer prescribed under the Police Act 1861?

What is the limitation period to commence inquiry and prosecution against a person on receiving a complaint under 42 of the act of 1861?