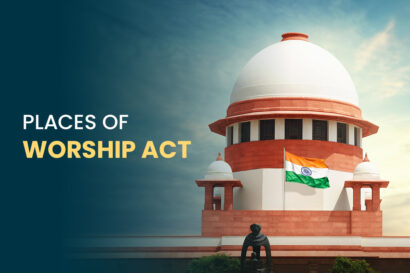 The destruction of a monument of political, cultural, or religious significance established by a previous, defeated order, followed by the construction of a new structure on its ruins, was customary practice for emperors and rulers of all faiths throughout history.

India is home to numerous monuments that contain traces and remains of earlier structures, even though the origin of a particular object or architectural component may be in question. After the passage of the Places of Worship (Special Provisions) Act 1991 ( sometimes referred to as the Places of Worship Act), none of this has any legal effect on the religious nature of a location.

Parliament had every intention of putting an end to assertions that aim to turn the clock back despite its knowledge of the potential historical relics in many places of worship.

Parliament has expressly commanded that history and its wrongs shall not be used as weapons to oppress the present and the future by retaining the nature of places of public worship. It is what the Supreme Court unanimously ruled in its 2019 Ayodhya decision, which five judges wrote.

The Places of Worship (Special Provisions) Act, 1991, has come to light due to the intense debates surrounding the current controversy regarding the Gyanvapi mosque survey.

It’s essential to note that the PV Narasimha Rao-led government established the Places of Worship Act, 1991, which places a positive obligation on the state to preserve every place of worship’s religious character as it existed at the time of independence.

The objective of the Act

The Places of Worship Act aimed:

Features of the Act

The Places of Worship Act states that as soon as the law takes effect, all lawsuits, appeals, or other legal actions about changing the nature of a place of worship pending before any court or authority on August 15, 1947, will be dropped. And further, no more legal action will be taken.

However, the prohibition against starting new legal processes does not apply to lawsuits involving status conversions that occurred after August 15, 1947. It preserves court cases, lawsuits, and appeals involving chances of status filed after the deadline.

The Ancient Monuments and Archaeological Sites and Remains Act, 1958, which governs ancient, historical, and archaeological sites and remains, will not be affected by these clauses;

Penal provision of the Places of Worship Act

Anyone who disobeys the prohibition against changing a place of worship’s status risks prosecution. Anyone who violates the ban is subject to a fine and a three-year jail sentence under the Act. Even if the crime was not committed due to aiding or conspiracy, those who participated in or aided the crime would still face the same punishment.

“The law belongs to the State and every national citizen.” The State has operationalised its constitutional duties to protect the equality of all religions and secularism, which is a component of the fundamental constitutional principles, by adopting the law. It has enforced a constitutional commitment. According to the Indian Constitution, we are required by the Places of Worship Act to uphold our commitment to secularism.

The Act specifies that, except for the Ram Janmabhoomi-Babri Masjid in Ayodhya, all places of worship must keep their original religious character, and no legal action may be brought to change the nature of a place of worship as it was on August 15, 1947.

What is the purpose of places of worship?

To perform acts of devotion, adoration, or religious study, people congregate in a place of worship, a specially designed building or location.

What is the object of the place of worship Act?

Who introduced the Places of Worship Act?

What is the penalty for violation of the Act?

Anyone who violates the prohibition is subject to a fine and a three-year jail sentence under the Act.

What is the exemption of the Act?

A lawsuit that has been successfully concluded or dismissed.A disagreement that has been resolved amicably between the parties. The conversion of any place occurred through consent before the Act took effect.