Register of All Indian Citizens—The National Register of Citizens (NRC) 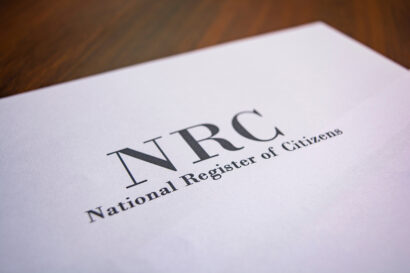 The National Register of Citizens (NRC) is a record that provides the names of all legitimate citizens of India. Only Assam has a registry like this right now.

The NRC maintained by the Indian government has all of the vital information about Indian citizens in Assam that is essential for their identification. Home Minister Amit Shah announced the extension of the NRC to the entire country during a session of parliament on November 20th, 2019.

After the COVID pandemic is over, NRC will be implemented across the country. Nagaland has already been working on a registry called the Indigenous Inhabitants Register, similar to NRC. The Centre plans to create a National Population Register (NPR), which would contain demographic and biometric data on citizens.

With special concerns about unlawful immigration, Assam had a citizen registry formed in 1951 based on population data from that year. Unfortunately, it was not kept up after that.

The Parliament then passed the Illegal Migrants (Determination by Tribunal) Act, 1983, which established a distinct tribunal process to identify unauthorised migrants in Assam. In 2005, the Indian Supreme court declared it unconstitutional, and the Indian government agreed to revise the Assam NRC.

After the inadequate progress for over a decade, the Supreme Court began directing and overseeing the procedure of revising the Assam NRC in 2013. The final revised NRC for Assam, issued on August 31, 2019, had 31 million identities out of 33 million, leaving 1.9 million applicants stateless.

The results disappointed the governing Bharatiya Janata Party (BJP), which pushed the NRC. It is believed that several lawful citizens were barred, while a large number of illegal migrants were allowed through.

The Citizenship Rules of 2003 allow the central government to make an order to prepare the National Population Register (NPR) and create the NRC based on the information contained in it.

According to the 2003 amendment, local officials would next decide whether the person’s name should be added to the NRC or not, determining their citizenship status. This practice may be carried out across India without the requirement for any new rules or laws.

The Indian government uses the National Register of Citizens (NRC) to identify and deport unlawful immigrants under Section 14A of the Citizenship Act of 1955 and the Foreigners Act of 1946.

The government adopted the NRC in the north-eastern state of Assam, which borders Bangladesh.

Due to the prolonged history of territory exchange agreements between the two countries, i.e., India and Bangladesh, and the legal migration of refugees amid the Indo-Pakistani War of 1971, international borders in Assam are young and split ethnically similar populations. As a result, the State must recognise and protect the permeability of established migrant categories.

In 2019, the government amended and published the final NRC list, eliminating roughly 2 million people – around 6% of Assam’s population – making them stateless.

Legal and regulatory provisions of NRC

The NRC structure has not been thoroughly scrutinised because many people believe no such legal structure exists.

The Citizenship (Registration of Citizens and Issue of National Identity Cards) Rules, 2003, were drafted under Section 18 of the Citizenship Act, 1995. The NRC must be established and maintained by the Registrar General of Citizen Registration as per the guidelines. Rule 4(1) expressly states that the government intends to conduct a nationwide NRC.

The initial step in the verification procedure is for a local registrar to create a Local Register of Citizens. During the validation process, “suspicious” citizens shall get recognised, and such “suspicious” citizens shall have a chance to be heard by the sub-district or taluk registrar of citizen enrollment. And this needs to be done before deciding to include or exclude their particulars in a local register, as per Rules 4(4) and 4(5) of the 2003 Rules.

Rule 4(7)(a) gives an aggrieved party the right to file an appeal with the district registrar of citizen registration within 30 days and have it settled within 90 days.

Furthermore, the Centre, state governments, Union Territories, and district magistrates can submit the issue of whether an individual is a foreigner or not to the Tribunal created under the Foreign (Tribunals) Order, 1964.

As the National Population Register is not yet created, the Central government plans to create it with demographic and biometric data of citizens. The National Population Register (NPR) will get updated in combination with the Census of India 2021. It will be run by the Home Ministry’s Department of the Registrar General and the census commissioner of India. Given the recently finished NRC, only Assam will get excluded.

The NPR requires every “usual resident of India” to register. The two legislations that are being used to create the NPR are:

The NPR data was initially acquired in 2010 as an aspect of the house listing phase of Census 2011, and a survey was conducted in 2015 to update the data. However, the NPR has been set aside in recent years as Aadhaar has become the primary mechanism for transferring government benefits.

So, the NPR will be conducted on a local, sub-district, district, state, and national scale. The NPR will collect biometric and demographic data, and the biometric data will be updated using Aadhar details.

NRC is a state-specific exercise to preserve the ethnic diversity of the state. Assam Public Works and Assam Sanmilita Mahasangha & Ors petitioned the Supreme Court, requesting that the names of illegal migrants be removed from voter records in Assam in the year 2013.

The Supreme Court ordered the updating of NRC in all areas of Assam in 2014, in compliance with the Citizenship Act of 1955 and the Citizenship Rules of 2003. The application procedure began in 2015, and the upgraded final NRC was announced on August 31, with over 1.9 million candidates missing out on the NRC list.

The home ministry announced that the NRC would be conducted all over again in Assam, following concerns about excluding numerous Hindus from the list.

Will NRC be applicable in other parts of the country?

Since the NRC was implemented in Assam, there’s been an increasing demand for its implementation across the country. Many key BJP leaders, including Home Minister Amit Shah, have suggested that the NRC adopted in Assam should get imposed throughout India.

It effectively proposes enacting legislation that will allow the government to discover infiltrators residing in India unlawfully, detain them, and deport them back to their home countries.

The government has passed legislation called the Citizenship Amendment Act (CAA) to compile a comprehensive list of India’s citizens. According to the legislation, people living here must present a legitimate document to prove that they were citizens of India before March 24, 1971. It drew tremendous condemnation from India since it claimed to be hostile to India’s Muslim majority. To oppose this act, protests were held in several areas of the country.

The solution to the historical problem of illicit migration from Bangladesh into Assam will not get cured overnight. However, completing the NRC process in such a short timeframe would not have been viable without the deployment of appropriate technologies.

It is worth noting that by utilising IT technology, all of the names, including their legacy data, have been digitalised and have achieved new levels of success.

Will the NRC be limited to people of a certain religion?

No, NRC has absolutely nothing to do with religion. The NRC protects every Indian citizen, and it's a citizen registry where everyone's name will be recorded.

What do CAA and NRC stand for?

In which year NRC was announced?

During the reign of which Prime Minister, NRC was announced?

NRC was regulated first in which state?

Assam was the first state to implement NRC.

Under which ministry the process of NRC is being done?