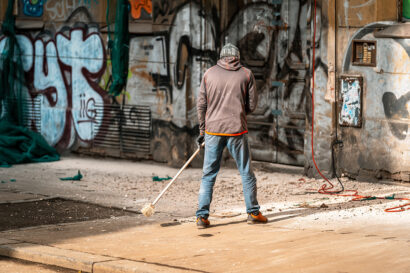 India has a history of a caste system practised since pre-independence. However, with time, caste-based inequality has decreased with the enforcement of the Constitution of India and several laws.

The caste system divided Hindus into four castes Brahmins, Kshatriyas, Vaishyas & Shudras. Brahmins were the highest caste, and Shudras were the lowest ones. Shudras, also called untouchables or Dalits, usually did all the cleaning and sanitary work.

Manual Scavenging, as the name suggests, is the Act of manually cleaning human excreta or carrying and disposing of human excreta in an insanitary latrine, an open drain, sewer or a septic tank. Manual scavengers who clean the excreta do the work manually using tools such as buckets, brooms and shovels. The workers carry the excreta from the pickup location to the disposal location several kilometres away.

The practice of human or manual scavenging is quite prevalent in India, Bangladesh & Pakistan. The manual scavengers rarely have any protective equipment; thus, this work is treated as a dehumanising practice.

Freedom fighter G.S. Lakshman Iyer took the first step toward manual Scavenging in the late 1950s after becoming Chairman of Gobichettipalayam municipality and banning manual scavenging. Delhi was the first state ( Union Territory) to ban manual Scavenging in 2013. District Magistrates had to ensure that no manual scavengers were employed and instructed to construct sufficient sanitary toilets to dispose of waste properly.

Manual Scavenging is the worst form of violation of Human Rights. It also violates the dignity of human beings as it is the lowest grade of work. It exploits the weaker sections of society, is also hazardous to their life, and is a death threat. The decaying waste releases innumerable toxic and poisonous gases, which can cause various diseases such as skin diseases, respiratory problems, long term illnesses, and can also be fatal.

Manual Scavenging is a violation of the right to life & liberty, right to health & freedom to dignity. Further, it violates the right to equality, as it treats untouchables as undignified. In official data released by the Ministry of Social Justice & Empowerment, 1013 people have lost their lives in utility holes & sewers until 2020.

The Act further promotes among the citizens the right to live with dignity as provided by the Constitution of India.

The Act came into force in December 2013 and provided a step by guide to preventing manual Scavenging. The guide included the following steps:

The Prohibition of Employment as Manual Scavengers and their Rehabilitation Act, 2013, is divided into eight chapters and thirty-nine sections.

Section 4 of the Prohibition of Employment as Manual Scavengers and their Rehabilitation Act, 2013, provides that the local authority are responsible for surveying insanitary latrines and sanitary community latrines.

As per this section, the local authority is duty bound to carry out a survey within their jurisdiction and publish the list of insanitary latrines within two months from the commencement of this act.

Further, the local authority shall notify the occupier within fifteen days after publishing the list. The notice is sent to demolish the insanitary latrine and convert it into a sanitary latrine within six months.

Section 5 of the Prohibition of Employment as Manual Scavengers and their Rehabilitation Act, 2013, provides that no person other than the local authority or any other agency should construct an insanitary latrine or engage or employ either directly or indirectly a manual scavenger. Further, any person employed as a manual scavenger should get discharged immediately.

Section 6 of the Act provides that any contract or agreement signed to engage an employee as a manual scavenger shall be terminated on the commencement of this Act.

Section 7 of the Act prohibits any person from engaging in the employment for hazardous cleaning of sewers and septic tanks.

Identification of the manual scavengers in urban and rural areas

Section 11 of the Prohibition of Employment as Manual Scavengers and their Rehabilitation Act, 2013, provides that every municipality with the reason to believe that any person employed in manual scavenging is in the jurisdiction of the Chief Executive Officer of the Municipality. The Chief Executive Officer should survey to identify the persons employed as manual scavengers.

Survey of manual scavengers in rural areas by the panchayat

Rehabilitation of person identified as Manual Scavenger by municipality and panchayat

Section 13 and Section 16 provides that any person included in the final list of manual scavenger shall get rehabilitated in the following manner:

The Act punishes the following offences:

Penalty for the violation under the Act

Penalty for the violation of sections 5 and 6 of the Prohibition of Employment as Manual Scavengers and their Rehabilitation Act, 2013, provided under Section 8:

Penalty for the violation of section 7 of the Act, provided under Section 9:

Section 22 of the Act, provides that the offences under the Act are non-bailable, cognisable offences.

Committees under the Act

Section 24 and 26 of the Prohibition of Employment as Manual Scavengers and their Rehabilitation Act, 2013, has formed three committees under the act. The two committees are:

The Vigilance Committee shall constitute of:

Functions of the vigilance committee

Section 25 provides the functions of the vigilance committee.

Section 26 of the Prohibition of Employment as Manual Scavengers and their Rehabilitation Act, 2013, provides that the state government should constitute a state monitoring committee.

The State Monitoring Committee shall constitute the following member:

Functions of the State Monitoring Committee

Section 27 provides the functions of the State Monitoring Committee:

Section 29 provides the provision for the constitution of the Central Monitoring Committee. ‘

The Central Monitoring Committee shall consist of the following members:

Section 30 provides functions to be performed by the Central Monitoring Committee.

Who is a manual scavenger?

A manual scavenger is a person employed to clean & handle untreated human waste from unsanitary toilets and open pits.

Following committees are set up under the Act:

What are the functions of the National Commission for Safai Karamchari?

The National Commission performs the following functions for Safai Karamchari:

What is the main objective of the Prohibition of Employment as Manual Scavengers and their Rehabilitation Act, 2013?

The main objectives of this Act are to identify manual scavengers through surveys and to provide for their rehabilitation.