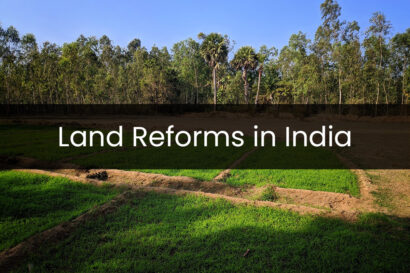 The term “land reform” relates to transferring land from the wealthy to the poor. Regulation of land ownership, operation, leasing, sale, and inheritance are all part of the land reform agenda. There are significant economic and political justifications for land reforms in an agricultural economy like India.

Land reforms in India are a government initiative to assist those living in difficult circumstances. It involves land transfer from those who have surplus land to those who do not have any land, thus benefitting the neediest members of society and ensuring fair land allocation.

As pledged during the independence war, the government was determined to redistribute land and ensure distributive justice. As a result, during the 1950s, all state governments established legislation to eradicate landlordism, redistributing land through the enforcement of ceilings, protecting tenants, and consolidating property holdings.

Governmental land policies are undertaken to make more efficient use of finite land resources by influencing holding conditions, placing limitations and grounds on holdings, and allowing for more efficient agriculture.

Need for land reforms in India

Farmers did not own the land they cultivated under the British Raj; instead, the Zamindars, Jagirdars, and other landlords owned it. As few people had ownership of the land, there were a lot of middlemen who didn’t have a genuine desire for self-interest. Land leasing was a prevalent practice.

Tenancy agreements were requisitive in nature, and tenant abuse was rampant. Land registries were in horrible shape, resulting in a slow down of lawsuits. The land was broken into relatively small portions for commercial farming—one challenge in agriculture. Boundary lands and disputes resulted from poor soil, capital, and labour utilisation.

Under the leadership of J. C. Kumarappa, a committee was formed to examine the land issue. In their report, the Kumarappa Committee pushed for wide-ranging agrarian reforms. The land reforms of independent India were divided into four sections, each implemented in stages to build political support for the reforms.

Objectives of land reforms in India

Impact of land reforms in India

The land allocation has been a part of India’s state policy from the beginning. The dismantling of the Zamindari system was undoubtedly the most significant land policy of independent India.

The rural agricultural economy, driven by land and agriculture, significantly benefits from land reform. Land reform projects have been conducted at a slow and steady pace. The goal of social justice, on the other hand, has been accomplished.

Land reforms in India envisaged that the state would seize all land belonging to landowners and distribute it to small landowners to make their holdings financially viable or to landless labourers.

FAQs on land reforms in India

Who introduced the Zamindari System in India, and in which year?

Who introduced the Mahalwari System in India?

Which were the two places where Mahalwari System was started?

In which year Land Reform Act was passed?