When does a contract become an illegal contract? 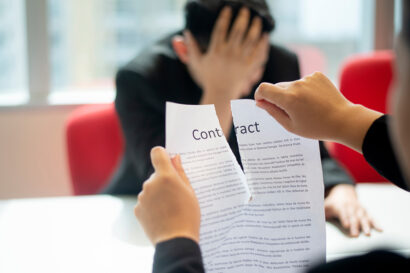 Any type of agreement can be affected by an illegal contract. Serious illegality renders a contract null and void. Legal remedies may be unavailable to one or more of the contracting parties.

However, just because a contract is illegal does not mean a court will deny a party or all parties any legal remedy. The court will also consider the steps taken when entering the contract to ensure that neither party engaged in illegal actions during the negotiation phase.

What is an illegal contract?

A contract is illegal if:-

These agreements are illegal, punishable by law, and null and void-ab-initio.

When a party seeks to enforce an agreement that the law forbids, an illegal contract prevents claims based on the contract. The illegality primarily serves as a defence to legal claims.

The courts will deny a claimant seeking to recover a benefit from their guilt. If a contract involves illegal activity, it will be determined by weighing a list of factors against the events that gave birth to the disagreement.

Examples of an illegal contract

Because the law strictly prohibits such agreements, entering into one is considered a punishable offence in the eyes of the law. As a result, the parties are penalised under the Indian Penal Code. An illegal agreement could include, for example, an agreement with ambiguous terms or an agreement to murder someone.

Difference Between Void and Illegal Contract

Another critical aspect of an illegal contract is that any agreement or transaction collateral to the main contract becomes unlawful and thus unenforceable.

There are various types of illegal contracts, all of which are null and void. Contracts can be considered illegal if either party’s conduct violates the law or is otherwise discouraging activity that others would consider offensive or wrong.

Suppose a party asserts illegality as a defence in a contractual dispute. In that situation, the offending party must show that the contract or the actions performed to enter into the contract were unlawful.

Is it possible to enter into a contract for an illegal objective?

Are illegal agreements null and void?

Illegal agreements are those in which the objective or consideration is not legally enforceable and is punishable by law. As a result, illegal contracts are null and void from the beginning.

Do courts have the authority to enforce illegal contracts?

What makes up an illegal contract?

An "illegal contract" is the agreement in which subject matter relates to an illegal purpose that violates the law.