All About Court Marriage in India 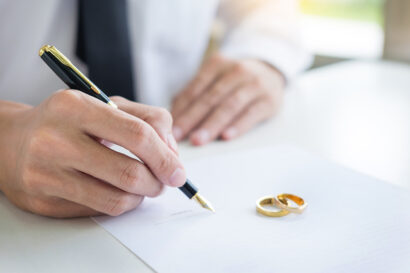 Unlike typical Indian weddings, court marriages get solemnised under/in conformity with the Special Marriage Act, 1954 (hence referred to as ‘the act’). The court marriage occurs or gets solemnised in the appearance of a Marriage Officer and three witnesses in the court itself. These marriages may not have to add more complex customary or ceremonial stages of the partners’ laws. Marrying in the appearance of a marriage official in compliance with the statute makes it a lawful marriage.

Documents required for a Court Marriage

Documents needed in the case of a foreign national:

A judicial wedding between an Indian and a foreigner requires the following in addition to the other documents listed above:

How does a court marriage work in India?

In Chapter II, “Solemnisation of exceptional marriages,” the following are the general phases of a judicial marriage:

Step 1 – Notification of the planned marriage

Section 5 of the legislation states that the first step in the judicial marriage procedure is to inform the marriage officer. It requires the parties to the union to notify the Marriage Officer of their intention to marry in writing and the manner provided in the Second Schedule. The Marriage Officer must have authority in the district where at least one of the parties has resided for at least 30 days before the notification is issued.

Marriage Officers are required by Section 8 to investigate objections within 30 days and to solemnise a marriage if the complaint does not prevent it from occurring. If the objection is sustained, the marriage officer may refuse to perform the wedding, and the parties may seek to the District Court.

Three witnesses and the parties shall sign a statement in the form stipulated in the Third Schedule, which the Marriage Officer shall then countersign.

Section 12 allows a court marriage to get solemnised at the Marriage Officer’s office or any other location within a reasonable distance.

The marriage is only valid if one-party states to the other, in the appearance of the Marriage Officer and three witnesses, “I, (A), accept thee (B), to be my lawful wife (or husband).” The parties may choose to have their marriage solemnised in any way they see fit.

The marriage officer records a certificate in the marriage certificate book in the manner stipulated in Schedule IV Special Marriage Act, 1954. A certificate signed by both spouses and three witnesses is solid proof of the judicial marriage.

Who can be a witness to the Court Marriage?

A witness to a Court Marriage can be anyone, including a family member, a family acquaintance, a coworker, or a friend. In addition, three witnesses need to solemnise a lawful Court Marriage.

Documents proving the identity of the witnesses are necessary for a Court Marriage. The witness must provide the following documents for the Court Marriage:

Typically, the complete process of solemnising a Court Marriage takes between 30 and 60 days. Marriage objections can get raised within 30 days after publication of the notice of intent. If any complaints get submitted within that period, the Marriage Officer has 30 days to investigate.

Note: If a marriage is not solemnised within three months of the notice, the Marriage Officer must issue a new notification for new behaviour.

What is the cost of court marriage in India?

Exceptions and other Conditions in the Procedure for Court Marriage

One practical aspect of the Indian Court Marriage system is that it is very straightforward compared to customary marriages, beginning with submitting an online application for Court Marriage and ending with the registration of Court Marriage.

The following are the benefits of a court marriage:

In India, what are the court marriage fees?

In India, the cost of a court marriage varies by state.

In Maharashtra, for example, court marriage procedure fees involve the applicant submitting a memorandum of marriage form affixed with a Rs.100 court fee stamp. If the wedding card is not available, Rs 100 gets levied. The bride and groom must also pay Rs. 95 (court marriage costs are subject to change) as a fee at the counter, for which they will receive a Challan (Receipt).

Who can be a witness to the Court Marriage?

A witness to a Court Marriage can be anyone, including a family member, a family acquaintance, a coworker, or a friend. In addition, three witnesses are required to solemnise a lawful Court Marriage.

Do you need your parents' permission to marry in court?