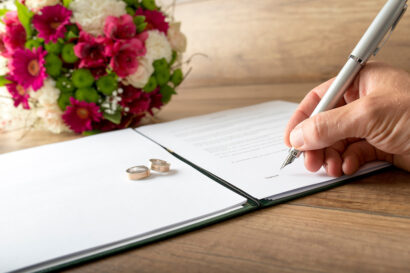 A court marriage is devoid of rites and ceremonies and is simple. The Marriage Registrar performs the court marriage procedure. Upon completion, the parties get a court marriage certificate confirming that their union is valid in the eyes of the law.

In India, either the Hindu marriage act of 1955 or the Special Marriage Act of 1954 governs the court marriages. Court marriage can get performed under both of these Acts- when a person marries someone of the opposite sex if the male is above 21, and the woman is over 18.

What are the steps involved in a court marriage in India?

Step 1- Informing about the planned marriage.

The first stage in the court marriage procedure is to notify the district marriage officer of your desire to marry. Fill out the court marriage application form (as indicated in Schedule II of the Act), which may also get accessed from the internet. You must submit the paperwork to the district office where either of the participants resides 30 days before the wedding day.

The notification will be displayed prominently in the district marriage registrar’s office for 30 days. Anyone can object to marriage within this period if it is judged illegal under the Act and the established eligibility standards. According to Section 7 of the Special Marriage Act, any individual having an objection to the prospective marriage may raise it within 30 days of the notice’s publication.

When a marriage registrar receives such an objection, they investigate its legality. If the registrar is reasonably satisfied with the legitimacy of the complaint, the court marriage procedure might get terminated immediately. In this instance, the parties may file an appeal against the marriage registrar’s order with the appropriate district court.

The bride, groom, and three witnesses must sign a declaration in the presence of the marriage registrar or at a site reasonably near the registrar’s office (as per Section 12 of the Special Marriage Act). The parties would sign a statement stating that they continued with the court marriage in their consent.

Documents for the Bride and Groom

How long the entire process of court marriage takes to complete?

Starting with the notification, the complete court marriage procedure might take up to 60 days. The information will be legitimate on no objection in less than 30 days of the notice’s publication.

The following are the benefits of a court marriage:

With Court Marriages becoming more popular in India, it is critical to understand the court marriage procedures that must be followed to be official and legal. It is popular among couples since it eliminates rituals and formalities and is straightforward. Court marriages are the favoured option these days for a variety of reasons. From wishing to keep the marriage a low-cost and uncomplicated event to inter-caste weddings between partners without the blessings of their families, there are a variety of reasons for this. Whatever the situation, choosing a court marriage can be straightforward, provided all of the essential paperwork is produced and the regulations mentioned above are followed.

What is the Court Marriage Fee?

What are the Attributes in Affidavit?

What is the timetable for a court marriage?

What is the Uniformity of Court Marriage Process in India?

Every law evolves with time, and one can notice continual changes in many acts and areas of Indian law today. The Special Marriage Statute is a secular act that applies uniformly to all religions. As a result, the Court Marriage procedure is the same for everyone, with no religious restrictions.