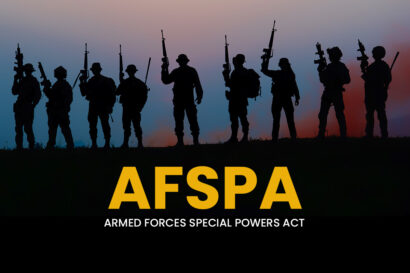 The Armed Forces Special Powers Act (AFSPA), enacted in 1958, has drawn criticism from various social groups. This law grants soldiers in armies unrestricted authority to shoot and kill anyone they believe to be a threat. The passed statute even offers immunity or protection from prosecution to the armed personnel. Since its establishment, AFSPA has been a controversial subject.

The Lord Linlithgow Ordinance of 1942, passed to stifle the Quit India movement and was one of the first former states to demand its exit from India, served as the foundation for the Armed Forces Special Powers Act of 1958. Following this, the government enacted AFSPA, legislation used by the British at the time to suppress the freedom movement. As a result, many Indians were killed and imprisoned, which ruined their families.

The AFSPA is identical to other colonial laws passed and applied to the masses before independence. Only officers with the rank of captain in 1942 were granted the right to fire; now that it includes non-commissioned officers, it has become more arbitrary.

In simple terms, the AFSPA empowers the armed forces to uphold law and order in “disturbed areas.” They have the right to prevent a gathering of five or more people in a given location, use force, or even open fire after providing a sufficient warning if they believe someone is breaking the law. The army may also detain a person and search a location without a warrant and forbid the possession of firearms if there is reasonable evidence.

According to AFSPA, an officer of the Indian Armed Forces may, under certain circumstances, fire upon or use force against a person who is breaking the law. Armed forces are also permitted to enter and search any location if they suspect illegal activity. According to the AFSPA Act, the Army also has the authority to detain someone without a warrant, seize weapons and ammunition, and offer protection to someone acting in good faith.

The Armed Forces Special Powers (Ordinance), a response to Mahatma Gandhi’s week-long Quit India Movement, was issued by India’s viceroy, Lord Linlithgow, on August 15, 1942. Gandhi and Jawaharlal Nehru were among the Indian National Congress’s most prominent prisoners. To hamper the war effort on the Burmese front against an anticipated Japanese invasion, Indian demonstrators set fire to police stations, railways, and telegraph lines, which the British considered sabotaging.

As a result of genocide and a massive flight of Muslims from India and Hindus and Sikhs from Pakistan, India and Pakistan got independence from British rule in August 1947. Just a few years after India’s independence, Jawaharlal Nehru, the country’s first prime minister, encountered his first insurgency in the Naga regions of Assam, close to the Burmese border. Baptist missionaries had won the majority of Nagas over to Christianity, and the Naga National Council had emerged as an intelligent leadership. During discussions with Indian officials, Gandhi raised the possibility of Naga independence, but Nehru fiercely rejected the idea and instead promised the Nagas autonomy within India.

A few years later, some Manipuri rebels travelled to Lhasa, where they founded the People’s Liberation Army, an insurgent organisation that worked with China to achieve Manipuri independence. Smaller insurgent groups started to emerge. According to the South Asian Terrorism Portal, 51 violent deaths happened in 1981 compared to just two in 1978. India passed the Armed Forces Special Powers Act in late 1980 after Manipur was labelled as a “disturbed area”.

Salient features of the AFSPA Act

Four states and one union territory currently have AFPSA activities, while 12 districts are still partially subject to the act, and 31 districts have fully implemented the law. The AFSPA states include:

Because of AFSPA, military organisations and governments can completely disregard human rights and the rule of law. Allegations of human rights breaches under the AFSPA include personnel who commit rape, use human shields on army vehicles, arrange fake encounters, and cases of disappearances while detained. Human rights groups have also claimed that the Act has been used to settle personal scores, such as property disputes, by passing false information to security agents through local informants.

Misuse of Absolute Power that the military has the unrestricted right to open fire on anyone they suspect of disobeying a command, based solely on suspicion. The ability to shoot someone on sight violates their fundamental right to life since it reduces them to mere objects of an officer’s judgement and makes the soldier on the ground the judge of the worth of lives.

The immunity granted to the military forces is the main grievance with the AFSPA. Without the prior approval of the central government, it may bring no prosecution, suit, or other legal action. This immunity, which shields security personnel and occasionally allows the armed forces to make irrational decisions, raises serious ethical concerns.

To regain control over areas that the Indian government deemed “disturbed,” the Armed Forces (Special Powers) Act was passed in 1958. Because it empowers armed personnel to prohibit assemblies of five or more individuals in a particular area, use force, or even open fire after providing sufficient notice if they suspect someone infringes the law.

The army only with ‘reasonable suspicion’ gets permitted to make an arrest without a warrant, enter a property without a warrant to search it, or forbid the possession of a firearm. Any person detained or arrested may receive a report outlining the facts of their detention and the officer in command of the neighbouring police station. Human rights groups have frequently criticised the Act for granting the army broad authority and immunities in war zones.

It is an act that empowers the army, state, and federal police forces to shoot, kill, search homes, and destroy any property that is likely to be utilised by rebels in "disturbed areas’’.

Who declares it as a “disturbed area”?

The state governor, the administrator of the union territory, or the central government may declare a region as a "disturbed area."

How many states have AFSPA Activities?

Four states and one union territory currently have AFPSA activities. They are Jammu & Kashmir, Nagaland, Assam, Arunachal Pradesh and Manipur

When was AFSPA Act originated?

The British passed the Act in 1942 in reply to the Quit India movement.

What is ‘disturbed area’?

Any location within a state significantly disrupts public peace and tranquillity due to disagreements or conflicts between members of various religious, racial, linguistic, or regional castes or communities.