Advisory jurisdiction of Supreme Court – Article 143 of the Indian Constitution 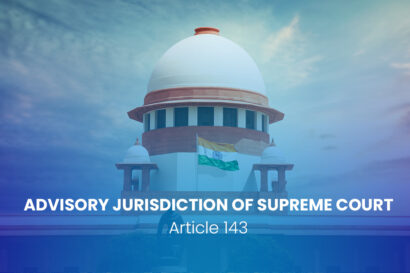 The Supreme Court of India is the country’s apex court, with extensive judicial powers and jurisdiction over all types of cases. It functions as a superior bench of the high courts and tribunals in the country.

A person is entitled to seek redressal or remedy in the event of a violation of fundamental right directly from the apex court under article 32 of the constitution of India.

The Supreme Court exercises its power under various jurisdictions. These are:-

The advisory jurisdiction of the Supreme Court is derived from the Government of India Act 1935.

Article 143 states that the president may ask for the Supreme Court‘s opinion on matters concerning questions of law or facts of public importance.

On such a proposal, the Supreme Court, after going through various considerations, may report to the president with its opinion.

The opinion is advisory, so the president is not obliged to act according to the given opinion. But it is of high importance, even though it is just advisory.

Article 143 provides the apex court with an advisory jurisdiction designed for assisting the President. Article 143 (1) is broad and provides that matters involving substantial questions of law can be referred to the Supreme Court for consideration. Article 143 is not considered a part of judicial administration.

The fact that the President’s reference to Article 143 (1) to the Supreme Court In re Special Courts Bill 1978 (the Special Courts reference) established a special court that addresses essential constitutional law issues.

Prime Minister Indira Gandhi cancelled the state of emergency after being defeated in the 1977 General Election. It created an overwhelming demand for the punishment of Mrs Gandhi, her son Sanjay, and other people.

The Shah Commission’s investigation found that there was undoubtedly a severe abuse of power during a state of emergency. However, due process of the law is slow, and Mrs Gandhi’s party did not keep a secret that procrastination weapons were used to prevent the “criminal” from being tried.

As a result, a private member, Ram Jethmalani, submitted a bill to the Lok Sabha to establish a special court. On August 1, 1978, the President of India, acting under Rule 143, referred the following questions to the Supreme Court:

The Supreme Court observed that:-

“The court’s decision, also known as ratio decidendi on a legal perspective in a conflict between two private parties, should be binding on all the subordinate courts in this country, but an advisory opinion is not binding on anyone, even if the decision was given after hearing the opinions of all concerned parties and notifying all concerned parties.”

Article 143 deals with the “authority” of the President, not the “jurisdiction” of the Supreme Court.

It does not refer to decisions but consultations. There must be no judgment or command, and opinions must be available and sent to the president in a report.

However, the Supreme Court is free to consider and overturn the views expressed in its opinion under Article 143 (1) if it deems fit.

Before the Cauvery Water Disputes Tribunal in 1992, it was decided that the jurisdiction of Section 143 (1) could not review previous decisions and is only possible under Article 137 of the Constitution.

In the Re Delhi Laws Act case (AIR 1951 SC 322) case, the court considered the validity of a statute concerning delegated legislation. The court observed that the legislature had the power to delegate some lawmaking powers to the executive but differed on the extent to which such power may get delegated.

In the case of the Cauvery Dispute Tribunal (AIR 1994 SC 522), the government set up a Tribunal to look into the dispute regarding the Cauvery River between the states of Tamil Nadu and Karnataka.

The tribunal ordered the State of Karnataka to release a certain amount of water to Tamil Nadu.

The Karnataka Government promulgated an ordinance that empowered them not to implement the tribunal’s order and refused to honour the tribunal’s decision.

The court held that the impugned ordinance was unconstitutional because it violated Inter-State Water Dispute Act, 1956 and was also against the principles of natural justice as the Karnataka Government became a judge in its cause.

In Ismail Faruqui v Union of India (1994 6 SCC 360), the apex court refused to address the reference sought by the President.

The Supreme Court contended that the presidential reference seeking the court’s opinion on the presence of time before the presence of Babri masjid on a disputed land was unnecessary and also against secularism which will result in favouring one religion over another and hence, doesn’t need to be answered.

Disadvantages of advisory jurisdiction of the Supreme Court

India, a democratic and secular country, can have adverse effects of judiciary getting involved with political controversies because of providing advisory opinions on the references. Therefore, this jurisdiction should be very carefully exercised; otherwise, it can lead to political controversy.

Estimates of various recommendations have been accused of being fictitious, theoretical, abstract, and highly unpredictable, as there are no competing parties.

We can infer from the various cases stated above that it is not a power of the Supreme Court that the apex court can exercise on its own and just empowers the president to seek the opinion of the apex court.

On what grounds the president is empowered to seek the advisory opinion of the apex court?

The grounds, President can seek the advisory opinion of the apex court include:

Can the Supreme Court, in its opinion, refuse to address the issue raised by the president?

The Supreme Court can refuse to give the opinion sought by the president by stating the grounds or reason for doing so.

What should be the strength of the bench giving an opinion on the reference by the president?

The strength of the bench should be at least half of the Supreme Court's total strength (i.e. five or more) in case of providing an advisory opinion.

What is stated by Article 141 of the constitution of India?

Per Article 141, the law declared by the apex court is binding on all the courts within the territory of India.

In re special court reference case (1978), what was the reference made by the president?

To consider the extent of the legislature’s privileges and the power of the Judicial reviews related to it.